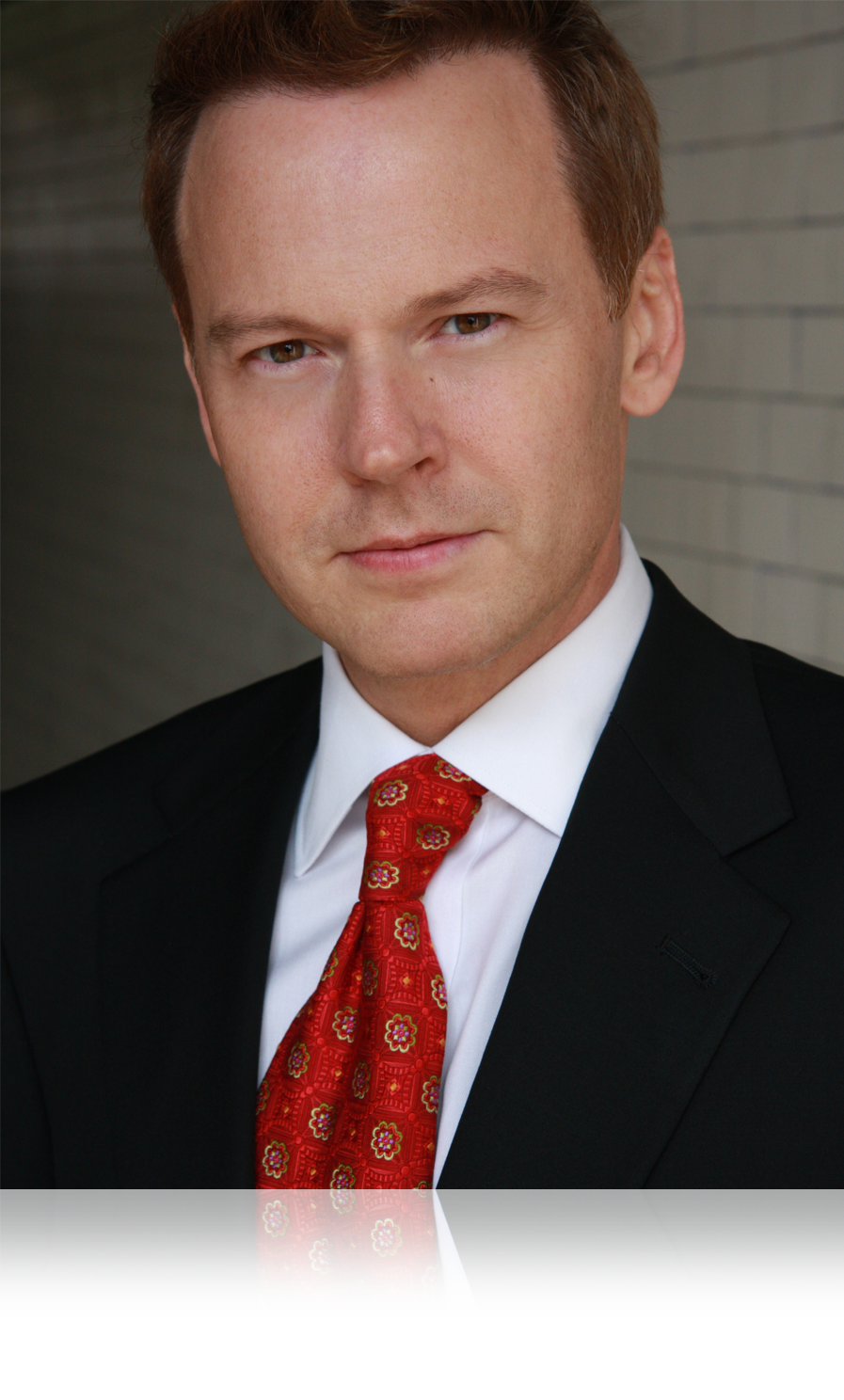 In this day and age, male facelift surgery is becoming increasingly popular throughout the United States. Even in the Los Angeles entertainment industry, more and more A-list actors are trying to “hold on” not just to their careers, but also to their looks as they age beyond 50. According to one major Los Angeles casting director “I definitely see a proliferation in men having facelifts…..they want to keep working and can’t look much older than female counterparts.”

Most men, however, who undergo a male facelift are not A-list actors or even involved in the entertainment industry at all. Nowadays, as many men age beyond 50, they also care about maintaining an attractive facial and neck appearance. Many men over age 50 are frequenting work-out gyms, eating healthy and generally living a healthier lifestyle than men did in decades past. These same men, however, realize that eating right and working out regularly after age 50 still does not help with the inevitable aging process that is progressively affecting their facial and neck appearance.

Their are some unique aspects about males that Dr. Hayduke considers crucial when performing and planning a male facelift. Male face skin is generally significantly thicker than female skin and male skin has a richer blood supply. Male facial skin has to support heavy coarse facial hair follicles in the hair bearing beard area. This makes male skin texture and quality totally different than female facial skin. Incision (scar) placement in a male also requires very special consideration for several reasons. Males over 50 tend to have very short hair styles as well as significant hair loss simply from aging (alopecia). Dr. Hayduke takes these issues into consideration and feels that incision design and final scar placement of male scars in is critical to achieving a high quality male facelift result. In addition, Dr. Hayduke feels a high quality male facelift result should not “feminize” the male face. Dr. Hayduke believes it is important to maintain a man’s masculine look after the facelift. In certain male clients who have a very weak (small) chin before surgery, adding a small tasteful chin implant can also help achieve a masculine jaw line.

One of the main reasons Dr. Hayduke has an office in the greater Palm Springs area (a retirement community) is because of his love for facial rejuvenation surgery. He is sometimes affectionately called “The Facelift Specialist” by his Palm Springs area facelift clientele. 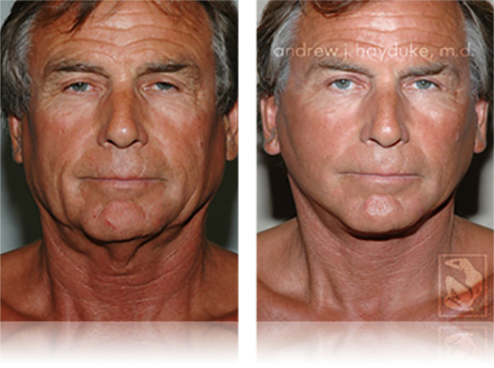 Facelift and upper eyelid bleph. Note the sharper jawline, smoother neck, and more alert appearance of the eyes after surgery. His “masculine look” was clearly preserved and tastefully improved upon.
BeforeAfter 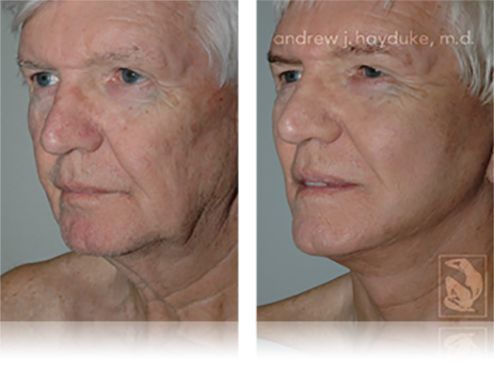 Necklift and facelift. Note the sagging neck skin, jowls, and deflated midface (cheek) area before surgery. After surgery, the neck and jawline are refined and the client appears youthful and revitalized. Actual patient of Dr. Hayduke

It is not unusual in Dr. Hayduke’s practice for a man to present to his office requesting cosmetic eyelid surgery. In the vast majority of cases, this would likely be the very first cosmetic surgical procedure that that man has ever requested. As men age, upper eyelid skin tends to accumulate and eventually can lead to a tired and aged appearance of the upper eyelids. The lower eyelid areas may also develop bulges of fat (lower eyelid bags) and loose skin that can reflect a tired and aged appearance.

Men know that the eyes are often one of the first features to show signs of aging, and the development of excess sagging eyelid skin and lower eyelid bulging bags can cause men to look more tired and older than they actually feel. When people interact with each other (either at the workplace or even socially), the first place they usually look at and fixate on is the other person’s eyes. Knowing this fact, cosmetic improvement of this area can improve a man’s perceived age significantly.

Male upper eyelid surgery (upper eyelid blepharoplasty) can help rejuvenate the upper eyelids. Male lower eyelid surgery (lower blepharoplasty) rejuvenates the lower eyelid areas. Special considerations need to be taken for the unique male anatomy and care needs to be taken not to feminize the male eyelid areas. It is acceptable in our culture for male eyebrows to be relatively low (as compared with females eyebrows which should be higher). Dr. Hayduke prefers not to perform eyebrow lifts (browlifts) in males specifically to avoid the feminized look of a male with lifted eyebrows. Only in the most extreme circumstances would Dr. Hayduke consider performing a male browlift. Several of the famous actors that are somewhat famous for having “bad plastic surgery” appear to have had a browlift (eyebrow lift) that totally feminized an otherwise good looking masculine face.

As men are working well beyond age 50 and constantly competing with younger counterparts in the workplace, they may want to continue to portray an energetic and well rested appearance – especially at their workplace. In addition, even retired men may have wives (or girlfriends) that pursued cosmetic rejuvenation and they wish to also achieve a more youthful look for themselves as they continue to age and enjoy their retirement. Properly performed male upper and lower eyelid surgery (blepharoplasty) can achieve excellent rejuvenation while maintaining a masculine eye appearance.

After weight fluctuations or simply with age, the male abdomen can take on a sagging unattractive appearance. Occasionally, the out-of-shape abdominal appearance is simply genetic, inherited from your mother or father. In some cases, the abdominal core musculature may have been permanently stretched out (separated) over time, known as “diastasis recti”. Whether loose sagging abdominal skin and fat, or separated abdominal muscles (diastatsis recti) are the culprit, cosmetic male abdominoplasty can be a very satisfying procedure in males.

A flatter, toned stomach is a physical feature that many men strive for. Frequently, the minor improvements seen with aggressive abdominal work-out routines are still simply not enough to obtain a significant noticeable difference. This leads to frustration. Dr. Hayduke encourages abdominal work-out routines guided by a professional personal trainer, as well as healthy eating habits. Keep in mind, some exercise professionals believe that incorrect abdominal exercises, including crunches can actually increase the distasis recti separation. Some recommend that all corrective exercises should be in the form of pulling in of the abdominal muscles rather than pushing them outwards. Overall, however, exercises may not be able to actually improve diastasis recti at all. In addition, exercise does not remove loose sagging skin (flat tire appearance). Ideally, Dr. Hayduke believes it is helpful for patients to also strive to be in the “normal” Body Mass Index (BMI) range for their height.

Despite all these efforts, if your abdominal appearance is still a problem, cosmetic male abdominoaplsty may be the solution. For males, Dr. Hayduke varies the incision design so that the final scar is in the most appropriate position for male swimwear, male underwear and male clothing.

The horizontal abdominoplasty scar is located underneath the underwear strap. Actual patient of Dr. Hayduke
BeforeAfter

The horizontal abdominoplasty scar is located underneath the underwear strap. Actual patient of Dr. Hayduke.

Men are frequently bothered by certain stubborn “fat depot” areas where male body fat is predisposed to accumulate. Frequently, these areas seem to be resistant to both diet and exercise in men. Unfortunately, fat accumulation gets even worse as we age beyond 35. Common “fat depot” areas in men that can be considered “problem areas” for fat accumulation include the lower abdomen, love handles, lower back, under chin and breasts.

Those stubborn “fat depot” areas can ruin an otherwise excellent athletic physique, even in avid exercise enthusiasts. It is not unusual to see serious weight lifters at the gym with extremely large well defined arm muscles, upper back muscles and leg muscles – but, their physique is marred by a pudgy lower abdomen, fatty bulges of the lower back area and enlarged fatty male breasts. These are men who work out one to two hours a day and obviously care about what they look like. This is just an example of how stubborn these particular “fat depot” areas are in men.

When men wear pants and a belt, it is common to see fat pudgy areas overhanging the belt area. This is caused by bulging fat of the lower abdomen and outer sides of the abdomen (love handles), sometimes referred to as a “flat tire”.

Dr. Hayduke avoids the gimmicky “non surgical fat reduction” procedures (that are frequently advertised) that claim to magically melt away your fat without actually removing any fat physically from the patient during the procedure. These gimmicky procedures claim that the fat goes away by itself several months after the treatment – on its own. It is prudent to be weary of things that simply sound too good to be true. In contrast, Dr. Hayduke actually sculpts away and suctions out the unwanted fat from the patient and you can see the removed fat collected in a container at the end of the procedure. No gimmicks are involved with Dr. Hayduke’s liposuction procedure. Liposuction can be a very satisfying procedure in properly selected patients who have realistic expectations. 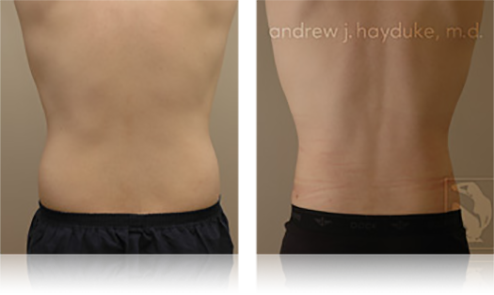 Liposculpture of the male love handle (lower back) region. This 33 year old male eats right and works out multiple times per week at a Los Angeles gym. He was bothered by a resistant area of bulging fat in the love handle region, despite extensive diet and exercise. Liposculpture helped achieve the more sculpted “in shape” look he was after. He said that his only regret was that he didn’t do it sooner. Actual patient of Dr. Andrew Hayduke.
BeforeAfter 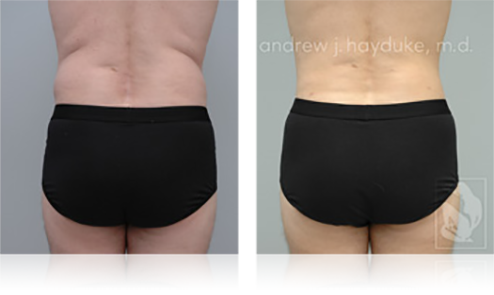 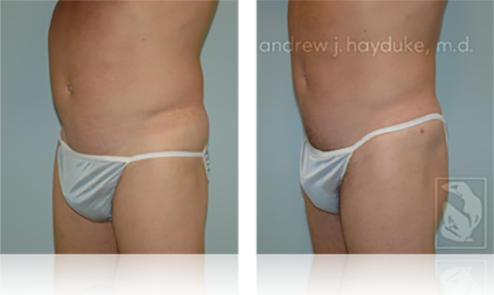 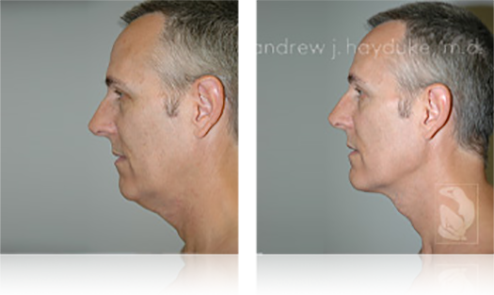 “Gynecomastia and pseudogynecomastia can cause significant feminization of the male chest. Even avid weight lifters can have problematic persistent fatty loose appearing breasts, despite working out the pectoralis musculature aggressively. Unfortunately, pseudogynecomastia tends to worsen as men age. 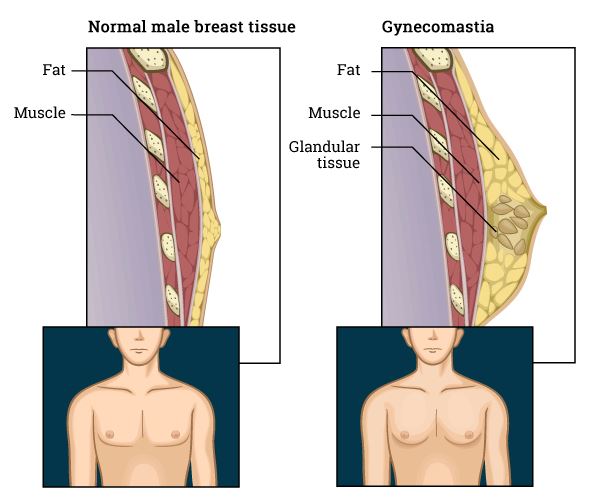